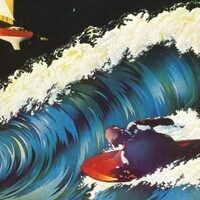 David Elfick’s cult classic Crystal Voyager (1973) is a love letter to surf in the Santa Barbara Channel and a portrait of George Greenough, one of the sport’s great innovators. Written and narrated by Greenough and filmed at the height of surfing’s transition era, when riders and shapers were experimenting with new kinds of board design, the film chronicles the construction of a sailboat capable of reaching the uncrowded breaks of the Channel Islands. Along the way, Elfick and Greenough document surf from Rincon to The Ranch in the company of World Champion Nat Young and local shaper/surfer Richie West. The Pollock Theater is proud to present a newly restored digital version of this pioneering example of surf filmmaking. Crystal Voyager transcends the travelogue, as it sets out to capture the embodied experience and ecological intimacy that make the sport so captivating.
Director David Elfick and author Garth Murphy will join moderator Alexander Champlin (Film and Media Studies, UCSB) for a post-screening discussion.