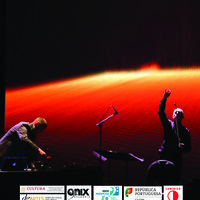 Performed by Alejandro Escuer and Rodrigo Sigal, the project combines contemporary concert music influenced by world music with video art, electronic, electro-acoustic and sound art. It’s an approach to contemporary themes from a philosophical and metaphorical point of view. The show is presented without interruptions, as if it were a soundtrack. This continuity allows the spectator to enjoy a deeper, hypnotic immersive experience, evidencing the persuasive and expressive power of contemporary music to provoke reflection and introspection, also taking advantage of the sound, poetic and conceptual sensibility of the spectator himself. Thus, Lumínico carefully elaborates a sound and visual event as if it were a ritual; a trance in which time is revealed as a line of introspection and critical and propositional meditation on issues related to the way of life of human beings in the XXI century. It’s a new way of listening to and presenting contemporary classical music. It’s about visual concerts, works linked to the image through a sound journey without interruptions. The project proposes an alternative form, a new ritual.

MAQUIN-ARIAS offers a unique vision of contemporary reality and the life of the human being related to machines, its paradoxes and contradictions through sound and visual metaphors that immersively immerse the viewer in a unique artistic experience: Consciousness, perception, intuition and rationality, all of which are emotionally linked in an introspective and personal show, unique for each viewer, which is built through high-level live performance and new sounds on the flute, in addition to the use of advanced audio and video using images and sounds of machines and other realities derived from them. The repertoire comes from many sound and video sources that make up a large visual corpus, which interacts with electronic and electroacoustic music, with live improvisation, contemporary concert music, classical music and other world music, all in delayed format and in real-time. It is a project that proposes original, innovative, purposeful and integrating scenic and sound forms, in accordance with the complexity and diversity typical of audiences in contemporary society.

About Lumínico
Alejandro Escuer: Flutes
Rodrigo Sigal: electronics and sonic diffusion
Lumínico gave its first concert in 2000. Since then, Luminico has performed in important festivals and universities specializing in music with technology in Europe, Asia and America. It’s supported and endorsed by Centro Mexicano para la Musica y las Artes and by Mexico en Escena Grupos Artisticos (FONCA). Founded by Rodrigo Sigal and by Onix Musica Contemporaena,  a nonprofit organization founded by Alejandro Escuer. The performances are highly unique and original: Luminico reaches the spectator’s visual and audible sensitivity by projecting powerful sounds and images that connect directly to the audience’s perception.  The works that integrate it are carefully selected and often written by the founders themselves and other international composers who have dedicated their work to them.