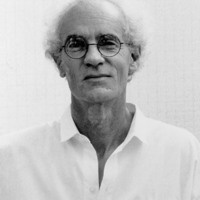 The Department of Music will present a Corwin Series Lecture featuring Composer François Bayle on Friday, January 22, 2021 at 11 am PST via Zoom. Bayle will speak on his music and influences in a lecture titled “…J’écoute donc je suis…” (...I listen, therefore I am…).

François Bayle was born in 1932 in Tamatave, Madagascar where he lived for 14 years. He studied in Bordeaux from 1946-54. In 1958-60, Bayle joined Pierre Schaeffer’s Groupe de Recherches Musicales in Paris, and between 1959-62 worked with Olivier Messiaen and Karlheinz Stockhausen. In 1966, Pierre Schaeffer put him in charge of the GRM which, in 1975, became an integral department of the French National Audiovisual Institute (INA). Bayle maintained this position until 1997. In addition, Bayle created the Acousmonium (1974). He originated the record series Collection Ina-Grm, still organizes concerts and radio broadcasts, and supports the development of technologically advanced musical instruments (Syter – Grm tools – Midi Formers – Acousmographe).