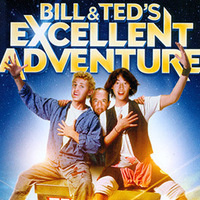 In this righteous comedy, underachievers Bill (Alex Winter) and Ted (Keanu Reeves) have spent so much time on their rock band, Wyld Stallyns, that they’re flunking high school history. When Ted’s dad threatens to send him away to military school, Bill and Ted realize it could mean the most heinous end of the Stallyns! Luckily, a guardian angel from the future (George Carlin) arrives with a bodacious solution: a time-traversing phone booth they can use to hear directly from history’s most influential personalities. Their journey may be a blast... but will they learn enough to pass their class? (Stephen Herek, 1989, PG, 90 min.)