AS Program Board Presents….In Conversation with Nathan Fielder! 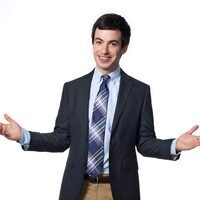 Nathan Fielder can currently be seen as the writer, director, and star of his hit Comedy Central series Nathan For You, which recently aired its fourth season. Fielder has guest starred in many shows as well, including “Drunk History,” “The Kroll Show,” “The League,” and “Childrens Hospital.” Additionally, he has lent his voice to hit animated series including “The Simpsons” and “Bob’s Burgers.” He most recently has appeared in the critically acclaimed motion picture “The Disaster Artist.” Hailing from Canada, Nathan is also well known for his online shorts and his weekly segments on the acclaimed CBC comedy series “This Hour Has 22 Minutes.” For his work on “22 Minutes” Fielder received a Canadian Comedy Award, a Writer’s Guild Award, and was nominated for a Gemini. In July 2014, Nathan received the “Breakout Comedy Star of the Year” award at the 2014 Just For Laughs Comedy Awards. Join us on June 3rd at 8:00p (7:00p doors) with the incredible Nathan Fielder!Tickets available NOW to UCSB Students only: aspb.as.ucsb.edu/nathan-tixTicket Prices: UCSB Students Advance: $10 | Door: $15