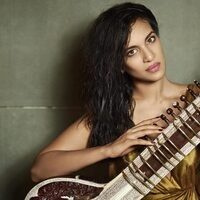 A singular figure in the Indian classical and progressive world music scenes, sitar player Anoushka Shankar’s outstanding musicianship is marked by a calligraphic dexterity and profound emotion. The six-time Grammy nominee and daughter of the late musical guru Ravi Shankar is advancing the Shankar legacy formidably into the future. “Expect to be thoroughly intoxicated” (TimeOut) as she reflects on her journey so far; drawing on classical ragas and experimenting with new ideas in a cross-cultural dialogue that showcases the versatility of the sitar across musical genres.
“No one embodies the spirit of innovation and experimentation more evidently than Anoushka Shankar.” – Nitin Sawhney, producer and composer