A Crucible Moment for Race in America: The Crisis of Racial Capitalism and the Challenge of the Movement for Black Lives 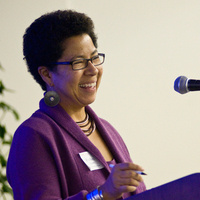 Please join the Office of Diversity, Equity and Inclusion for the next event in the 2020-2021 series Anti-Blackness: Difficult Dialogues, with a presentation by Dr. Barbara Ransby titled, "A Crucible Moment for Race in America: The Crisis of Racial Capitalism and the Challenge of the Movement for Black Lives."

About the Speaker: Dr. Barbara Ransby Distinguished Professor, in the Departments of African American Studies, Gender and Women’s Studies, and History at the University of Illinois at Chicago (UIC) where she directs the campus-wide Social Justice Initiative, a project that promotes connections between academics and community organizers doing work on social justice. She is a graduate of Columbia University and the University of Michigan, where she was a Mellon Fellow.

Dr. Ransby is not only a historian and writer but also a longtime activist.  She was deeply involved in the anti-Apartheid/ Free South Africa movement in the 1980s and later co-founded a number of organizations including: The Ella-Baker Nelson Mandela Center, Ella’s Daughters, and African American Women in Defense of Ourselves. She is a founding member of the national organization Scholars for Social Justice and works closely with The Movement for Black Lives and the multi-racial coalition, The Rising Majority. She serves on the Board of Directors of the Woods Fund of Chicago, and the grassroots Chicago-based, Equity and Transformation, (E.A.T.) a group that supports formerly incarcerated persons and those working in the informal economy.

Dr. Barbara Ransby is author of two award-winning books: Ella Baker and the Black Freedom Movement: A Radical Democratic Vision (University of North Carolina Press,2003); and Eslanda: The Large and Unconventional Life of Mrs. Paul Robeson (Yale University Press, 2013,). She is also author of a third book published in August 2018 entitled: Making All Black Lives Matter: Re-imagining Freedom in the 21st Century. The Ella Baker book was the recipient of 8 national book awards and recognitions including the Liberty – Legacy award from the Organization of American Historians; the Joan Kelly prize from the American Historical Association; and the James A. Rawley Prize (also from the AHA). In 2018 the Chronicle of Higher Education acknowledged the Baker biography as “one of the most influential books of the last twenty years.” Her second biography, Eslanda, was the recipient of the Letitia Woods Brown Memorial prize for the best book in African American women’s history from the Association of Black Women Historians. In 2017 Dr. Ransby was honored as “one of the top 25 women in higher education,” by the publication, Diverse Issues in Higher Education.

Dr. Ransby publishes regularly in popular venues, which include: DISSENT, In These Times, Colorlines, The Nation, the Boston Review. Truthout and the New York Times.

Pre-registration with either a UCSB or UCI email address is required for this event. A Zoom link will be provided prior to the event for confirmed registrants. Interpretation and Captioning will be provided.