KITP Public Lecture - "Where Does the Matter That Falls into a Black Hole Go?" with Carlo Rovelli 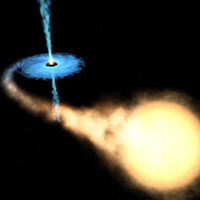 There have been spectacular advances in our knowledge of the amazing objects in the sky that are the black holes during the last few years. Several Nobel Prizes have recognized this luminous moment for fundamental gravitational physics. All observations beautifully confirm our current theories. And yet, black holes remain utterly mysterious.

We observe a great amount of matter plugging into them. Where does it go? It is a simple question, but there is no consensus among scientists about the answer. Scientists are split into communities that follow different ideas and are often prey of fads and prejudices. The interior of a black hole is a strange place, whose space-time structure challenges our intuition. In this lecture, presented by the Kavli Institute for Theoretical Physics at UC Santa Barbara, Rovelli will describe what we know about the inside of a black hole, and current ideas to make sense of what we do not yet know about these most astonishing objects that fill the universe.

Carlo Rovelli is a theoretical physicist known for his work in quantum gravity. He was born in Italy, has worked in Universities in the United States, France and Canada. He heads the Quantum Gravity group of the Center of Theoretical Physics of the Aix-Marseille University. Rovelli is member of the Institute Universitaire de France, honorary professor of the Beijing Normal University, Honoris Causa Laureate of the Universidad de San Martin, Buenos Aires, member of the Académie Internationale de Philosophie des Sciences. In 1995 he has been awarded the Xanthopoulos Award for “the best relativiste worldwide under forty”. He has written global best sellers among which are Seven Brief Lesson on Physics, translated in 44 languages, The Order of Time and the recent Helgoland, on quantum theory. Foreign Policy magazine included him in their2019 list of the 100 most influential global thinkers.