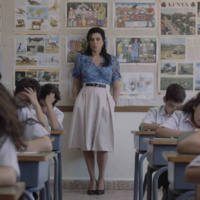 Writer/director Oualid Mouaness’s 2019 film 1982 tells the story of Israel’s invasion of Lebanon in June 1982 through the eyes of 11-year-old Wissam (Mohamad Dalli), a student at a Quaker school in the mountains above Beirut. Amidst the backdrop of approaching geopolitical violence, Wissam busies himself with the everyday concerns of school life and his attempts to confess his crush on a fellow classmate. Teachers Yesmine (Nadine Labaki) and Joseph (Rodrigue Sleiman) try to shield their young students from wartime fears and their own interpersonal tensions as teachers fall on opposing political sides. The film’s story draws from the director’s own boyhood experiences of the invasion, and its shifts between child and adult perspectives shed light on the political and social complexities of that historical moment. 1982 was screened at the Cannes Film Festival and the Toronto International Film Festival, and it served as Lebanon’s official entry for the 2020 Academy Awards.